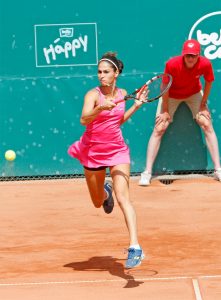 From the very beginning, it seemed like Isabella Shinikova is going to quickly and easily win the match. She was a clear leader and reached 5:0 in the very first set. Then, Tadeja Majeric asked for a medical break. That short pause brought her back on her feet, but it also caused some unexpected tension between the players. Majeric dealt with it a lot better. Her confidence on the court has grown and more important, her game improved. Shinikova, out of balance and clearly angry at her own mistakes, lost five games in a row, but fought back and managed to win the set 7:5. They were going head to head in the second set. After reaching 3:4, Majeric won three following games (including two break points) and won with the overall score 6:4.

In the final set of the match, Isabella Shinikova managed to control her emotion and get her head back in the game. She took the charge on the court. Bulgarian representative, giving away only two games, won the whole match 7:5 4:6 6:2.
‘I want to thank everyone for organizing the tournament and the audience for their support in the final match. I am very happy with the game.’ – Isabella Shinikova summed up her appearance in the Bella Cup 2016 tournament.