Witryny Bella Cup > Bella Cup > News > Maja Chwalińska was a clear star of the first round of the tournament in Toruń.

Upcoming match that Magdalena Fręch will play against Katarzyna Kawa is going to be a real treat. Three polish players qualified to the next round of the International Women Tennis Tournament Bella Cup. 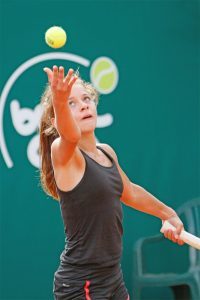 The biggest event of the first round was the match played by Maja Chwalińska (Advantage Bielsko-Biała). That 14-year-old player competed with Russian Valentyna Ivakhnenko, seeded number 6, who recently took a part in doubles finale in Katowice Open. Giving the wild cards to a current Poland under 16 Champion and seniors’ half-finalist was organizers’ ideal choice. Polish representative faultlessly reached score 5:0 in the first set. She had double match point in the second set, but Ivakhnenko fought hard, and in the end won the tie-break. Maja gave her all in the third set and won the whole match 6:2 6:7(1) 6:4. It was her first ever triumph in the professional tournament. In the second round, she will face Czech Gabriela Pantuckova.

Also Magdalena Fręch has qualified to the next round without any problems. After only 48 minutes, she seamlessly beat Russian representative Maria Marfutina 6:0 6:0. Another success in the first round belongs to Katarzyna Kawa. 23-year-old contestant won 6:3 6:1 with Kristina Schmiedlova from Slovakia, showing that she is in a better shape than in the previous Bella Cup tournaments.

Justyna Jegiołka and Marcelina Podlińska were not that lucky, and had to say goodbye to the Bella Cup courts after the first round.

In the second round, among many other foreign contestans, we are going to see Isabella Shinikowa from Bulgaria and Czech Tereza Smitkova, seeded number 1 and 2. Number 3, Valetiya Strakhova from Ukraine, already left the tournament.

The biggest treat of the second round is going to be a match between Katarzyna Kawa and Magdalena Fręch, who ended up in the same quarter of the tournament’s draw. That is definitely the one to watch. Both organizers and players want to invite you especially for that encounter.