First round of the 25th International Women’s Tennis Tournament Bella Cup 2019 singles has ended. On Wednesday, Maja Chwalińska went forward to the next round.

Chwalińska, player from Dąbrowa Górnicza, did not give much of a chance to Daniela Seguel from Chille. 17 year old Polish representative was very confident on the court, cleverly using her opponent’s weak spots, but she made few mistakes along the way as well. She won the first set 6:2. Moment of hesitation came when Chwalińska was leading 4:0 and Seguel broke ger serve. However, Chwalińska was able to triumph in the end, winning 6:2 and going forward to the second round of the Bella Cup 2019 tournament.

– Every match on that high level is hard. No matter who you play against, you need to fight for each point. Most importantly, it ended with a win, even though not entirely the way I would like.

It did not go so well for other Polish players. Katarzyna Kawa surprisingly lost with Anastasia Zarycka from Czech Republic 6:4, 6:7(3), 1:6. It was the longest match in this year’s tournament so far. It took 2 hours and 47 minutes. Paula Kania was defeated by Jaimee Fourlis from Australia 2:6, 1:6. Weronika Falkowska lost 3:6, 1:16 with Romanian representative Nicoleta-Catalina Dascalu.

Another big surprise was the end of the road in the competition for Elena Rybakina, seeded number 1. Kazakh player lost with Slovakia’s Rebecca Sramkova 2:6, 4:6.

First round of the doubles has also finished. Anna Hertel and Stefania Rogozińska-Dzik lost with Danka Kovinić (Montenegro) and Laura Pigossi (Brasil) 3:6, 3:6.

Second round will begin on Thursday. We will see two Polish representatives on the courts: Maja Chwalińska and Stefania Rogozińska-Dzik. 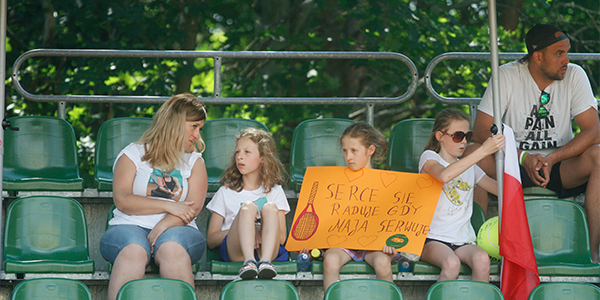