Only foreign contestants will play for a place in the 22nd International Women Tennis Tournament Bella Cup 2016 finale. 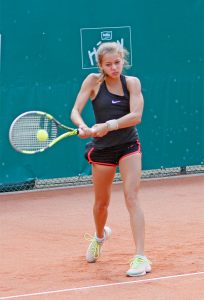 Yesterday’s match, suspended due to a heavy rain, was continued today. The youngest Bella Cup contestant, Maja Chwalińska, didn’t manage to beat Gabriela Pantuckova in the second round. Czech won 6:4 1:6 6:4.

‘It was a tough match. I didn’t stand it physically, but I gained a lot of experience thanks to that tournament’ – Chwalińska summed up her game.

On Friday it’s all about the singles quarter-finals on the courts in Toruń.

The only Polish representative in that round failed to defeat the tournament’s number 1 – Bulgarian Isabella Shinikova. Fręch started very well. Confidence on the court helped her win the first set. In the second set Bulgarian representative beat her in the tie-break and in the third one practically crashed Magdalena on the court. Match ended with the score of 4:6 7:6(3) 6:0 for Shinikova.

‘It was extremely hot and airless. I stand two sets, but then something broke physically and mentaly. I feel very sorry for it.’ – Fręch admitted after the match.

Also in the doubles finale we won’t be seeing any Polish players. The last one with a chance for qualification was Justyna Jegiołka paired with Ukrainian Valeriya Strakhova. They lost 1:6 6:3 0:10 with Akgul Amanmuradova (Uzbekistan) and Valentyna Ivakhnenko (Russia). On Saturday the winning duo is going to face the remaining finals’ pair: Irina Maria Bara (Romania)/ Valeria Savinykh (Russia).