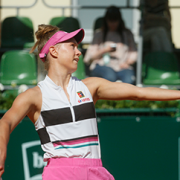 Bella Cup 2019 has gone to the second phase. Eliminations are over and the main tournament has begun.

However, fans were mostly waiting for the first games of the main tournament, especially those with Polish representatives. Stefania Rogozińska-Dzik started off facing Australia’s Olivia Rogowska. We saw a series of breaks from both sides of the court. The most importnat was the one in the 10th game. Rogozińska-Dzik gave away only once and won that set 6:4. Second one was filled with excitement. Polish player was leading 4:0 when she started losing her focus. Rogowska won three games, but then the good streak came back to Rogowska-Dzik. She triumphed in the set 6:3, winning the spot in the next round of the tournament.

-It is my life’s success. I have never won with a player, who is so high on the ranking. I panicked a little bit in the second round, but I was able to calm myself down and win two last games.

Second big treat for Polish fans was the match between Anna Hertel with Anhelina Kalinina on the central court. Unfortunately, she was not able to win with Kalinina. Hertel won only three games in that match. Seeded numer 3, Ukrainian representative triumphed 6:1, 6:2.

We were also able to watch first doubles matches. In one of them two Polish teams faced each other. Julia Oczachowska with Zuzanna Szczepańska have won with Aleksandra Jeleń and Joanna Zawadzka 7:6(4), 4:6, 10:6. Other match gave us a victory of Weronika Falkowska, Martyna Kubka duo over Brasilian-American team Alves – Scholl 1:6, 7:6(4), 10:6.

Tomorrow we will see Katarzyna Kawa, Maja Chwalińska and Paula Kania stepping on the courts in Toruń. 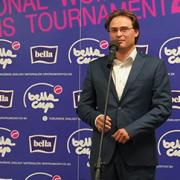 The organizers of the 24th International Tennis Tournament Bella Cup summarized this year’s competition. It was a record year in terms of the number of people who got information about the tournament in Toruń.

The Bella Cup 2018 summary meeting was an opportunity to thank all of the sponsors, partners and patrons for help in organizing the tournament. At the same time, the media results of the Bella Cup were presented and these were record results. Through three television stations: TVP3, TV Toruń and KP Sport (Internet relations) information about the tournament was watched by over 2 million viewers. Bella Cup was widely present in the press (Rzeczpospolita, Przegląd Sportowy, Gazeta Pomorska, Nowości) and on internet portals, both local and nationwide.

The organizers also said that the tournament is received positive reviews not only from the fans, but most importantly also from the players.

They praise us very much. As a rule, it is always a longer, pleasant conversation. Many of them assure that they will want to come again in the next years

Works on the next, jubilee 25th Bella Cup Tournament have already begun.

We know that the tournament will definitely take place in a more attractive time for players – this is already confirmed. The arrangements for increasing the tournament budget and, of course, the prize pool in the 25th Tournament are underway 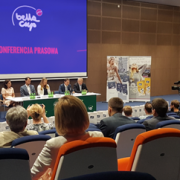 39 Polish players applied for the 24th International Women’s Tennis Tournament Bella Cup 2018 in Toruń. Winners of the past editions are also willing to join the competition.

Incredible tennis event is getting closer. We are only days away from the beginning of the 24th Bella Cup, ITF tournament with prize pool of 25 000 $ + hospitality. More details were announced on the first press conference of the upcoming event.

One of the Polish players stepping on the Bella Cup courts this year is Katarzyna Kawa. She has triumphed in a similar rank tournament just days ago in Portuguese Obidos.

‘Those years when I took a part in the tournaments in Toruń, everything was organized perfectly. That tournament is very similar to the ones in higher rankings. It is a great comfort for the players. I am very happy that I can join a tournament in front of Polish fans again.’

Invitation was also accepted by Katarzyna Piter, representing Poland in the FED Cup. We already saw her on the Bella Cup courts, including the 2013 tournament, when she reached the finale, but lost with Paula Kania.

There are 39 Polish players amongst the 330 who applied to join the 24th International Women’s Tennis Tournament, with Urszula Radwańska, Iga Świątek and Maja Chwalińska. Also, all the winners of the last three Balla Cup editions joined the tournament: Kristina Kucova from Slovakia, Isabella Shinikova from Bulgaria and last year champion, Chantal Skamlova from Slovakia.

Full list of this year’s contestants can be found here: www.itftennis.com

Bella’s main goal, our beautiful women’s health, comes down to three points. We get involved with pro-health programs for women. An active lifestyle, in which we encourage to run, exercise and take care of the proper physical form. Third point focuses on sport events. Bella Cup tournament is a very important part of that program. – we heard from Jarosław Kuzel, board member of the TZMO SA, tournament’s general sponsor.

I am constantly amazed by what is happening in Toruń. It is one of my favourite places. It is very important, that this tournament is organized in such incredible conditions. All the players will surely appreciate it. It make it the most important women’s tennis event in Poland

24th International Women’s Tennis Tournament Bella Cup 2018 will begin on 24 June. After two days of the qualification games, the main tournament will open on 26 June. Grand final is scheduled for 1 July. Free admission to the courts. 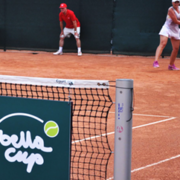 On June 25th, players from all around the world will begin the rivarly in 23rd International Women’s Tennis Tournament Bella Cup.

END_OF_DOCUMENT_TOKEN_TO_BE_REPLACED 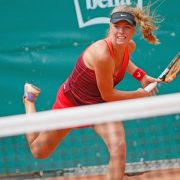 Only foreign contestants will play for a place in the 22nd International Women Tennis Tournament Bella Cup 2016 finale. END_OF_DOCUMENT_TOKEN_TO_BE_REPLACED 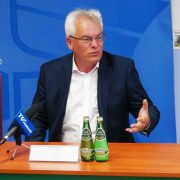